This was in today's news in KentOnline--

A £200,000 bronze statue of Canterbury Tales author Geoffrey Chaucer will be unveiled in the city today.

It is the result of a 10-year campaign by the Canterbury Commemoration Society to acknowledge Geoffrey Chaucer’s important association with the city.
The life-sized figure, sculpted by Sam Holland, is being sited in the Three Cities Garden in Best Lane.

The sculpture will also feature the faces of city personalities around a plinth representing characters from his greatest work, which tells the stories of pilgrims travelling from London to visit the shrine of Saint Thomas Becket in Canterbury Cathedral.

It follows months of research with historians and costume experts to ensure the period detail, including his accessories, are correct.

Sam’s interpretation depicts Chaucer representing himself as one of the pilgrims in The Canterbury Tales, part kindly old man and part all-seeing soothsayer.

The cost has been met through fundraising, donations, grants and the £5,000 sponsorship of each of the 29 characters’ faces, which include Canterbury-born actor Orlando Bloom as the Young Squire.

(The picture of the scale model would not copy.)

Join us at Our Lady of the Assumption Church in Claremont CA.

That's at the corner of Bonita and Berkeley. It's Saturday, October 29th at 5:30. The music is from the Middle Ages and Fr. Tom Welbers will say the Mass. See you there.
Posted by Dolores Cullen at 8:53 AM 1 comment:

When I organized my "Chaucer Room," I reserved the wall above my desk for sources of inspiration. I knew I would need encouragement for the road ahead. I posted helpful, inspiring quotes there.
One of the first little items was my favorite Bible verse: This is the day the Lord has made; let us rejoice and be glad in it. I'd found a charming Middle English version--with the thorn (Þ) that became th.


Þis ys  Þe day
Þat our lord made;
be we glad and ioyfull in hure!

Soon after came a quote from Venerable Bede. It expressed precisely how I felt about studying Chaucer. I knew many students who were content to scan the Tales in Middle English--or even to read Modern English versions instead! I already recognized what they were missing.
Bede, addressing a medieval audience, said, Reading should be slow and attentive, laborious, intent on the reward contained in the underlying meaning. This is my work-style in a nutshell, taking each word as important, with the Middle English Dictionary at my side.  Bede's recommendation  naturally became the perfect epigram for my first book-- Chaucer's Host.
Of course inspiration can come from less-than-serious sources. I used to refer to myself as an "intellectual bottleneck." This cartoon doesn't exactly reflect that, but it always made me laugh and renew my determination to say what needed to be said. 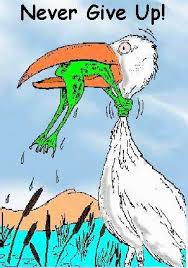 Peter Elbow helped me overcome the bottleneck. We'll get to him soon.

Posted by Dolores Cullen at 9:31 PM No comments:

The hazard of the spoken word

My son lives in Houston. (I'm near LA.) He is an avid reader and often recommends books to me. When he said the book he had just read was unusual and captivating, upon hanging up my landline, I connected to Amazon. What's quicker, easier and more addictive than one-click? Anyway, I ordered the book--Bell Weather. 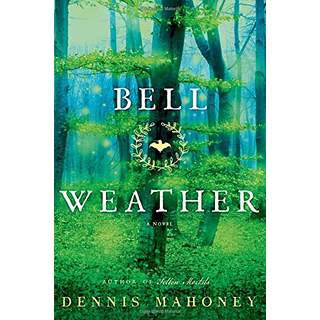 It arrived in a couple of days. The endpapers show a map with islands and oceans as a fictional region of the earth. The story had that touch of magical realism I'd found in Xavier Garcia Márquez. It surely was odd and entertaining, but I had to admit to my son, "I've never figured out what the title means."
He was visiting California at the time. His brows furrowed as he responded, "But it explains the meaning when the sheep arrive."
My wide-eyed reaction: "The sheep?"
He asked to see the book, leafed through a few pages, then whipped out his smartphone to order a "replacement" for me. The mysterious confusion I felt was relieved as soon as the book arrived. 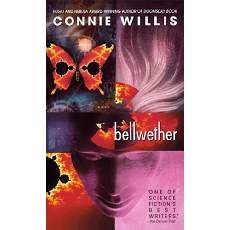 Moral: Don't have complete faith when you hear the title; get the author's name as well.
Posted by Dolores Cullen at 11:21 PM No comments:

What can we learn from a hollyhock?

Here's a "volunteer." A seed fell at the edge of my sidewalk and decided to "bloom where it was planted" as the wise saying goes. This is Southern California.  We haven't had any rain to encourage it--but that didn't stop it.  It's only six inches tall but blooming as if it was six feet tall. 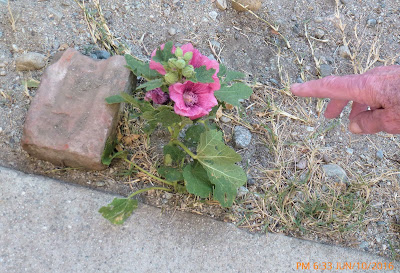 That's Courage and Determination.
Posted by Dolores Cullen at 11:03 PM No comments:

The Cook, my very favorite

I was going to write about all the pilgrims, but when a friend got me talking about the Cook, writing about him was irresistible. No Canterbury Pilgrim is more creative. What fun the poet must have had! We'll ignore editors "improvements" that actually distort Chaucer's own words.
First we'll talk about the introduction of the Cook and his companions in the General Prologue. Then we'll look at the Cook's Tale. The Cook is the astrological sign of Cancer. This is clear from Chaucer's description of the "mormal," the oozing, incurable sore on the Cook's leg. That's about as close as you can get to simply using the word cancer.
This sign has no prominent stars, so the poet mainly concentrates on the figure of a crab. The one visual heavenly endowment, however, is a modest star cluster called Praesepe which has two meanings: Manger and Beehive. Chaucer capitalizes on both these images.
At the end of this pilgrim's description, when the mormal is announced, the Cook's expertise in making a fish pudding immediately follows. The dish is called Blank Manger. Such close association is unsavory! The unsavoriness is meant to be noticed. And the chosen recipe is an opportunity to mention the star cluster.
If these lines indicate the sign's identity, then who are the Guildsmen and why are they necessary? I think they are "necessary" mainly because of Chaucer's wit. A Biblical tradition says, "The body is one, and hath many members." And an Aesop fable popular in the Middle Ages is called, "The Belly and Its Members." This is the picture Chaucer brings to life. One of Chaucer's contemporaries even refers to the belly (stomach) as the "cook" for the entire body.
Now, if the Cook is the belly, the five Guildsmen must be its members. A group of five--5 pairs of legs--is, again, a "necessity."
And they were clothed all in one livery
Of a solemn and a great fraternity.
When we are told that these five men are clothed all in one livery, Chaucer means exactly that: five men inside one suit. This is another line meant to get our attention. "Clothed" can mean covered, as incarnation expressed as "to clothe in flesh." And Chaucer's use of livery can be seen as ambiguous where the 14th-century "livery" can refer to a living being. Then the line can be understood to say, "the Guildsmen were enveloped as one living being" in the great fraternity of Crustaceans.
Although confident that I had properly recognized the sign of Cancer the crab, the remainder of the introduction of the Guildsmen confused me. Why did Chaucer say their "wives" have cloaks "carried royally"? That is, their garments had trains. The answer to the question, thank goodness, came from a picture of a doorjamb at Notre Dame in Paris. The twelve signs of the zodiac are carved there as heavenly bodies created by God. Surprisingly, Cancer is not a crab but a lobster, a figure with a substantial part trailing behind. Why? Because in Latin, which was common knowledge among the educated, both crab and lobster are expressed by the word cancer.

There is an abiding problem regarding pilgrims who tell no tale, the five Guildsmen, for example. Here's the answer to that problem: It's not Chaucer's failure. Their only function is to complete the picture of the sign! During the pilgrimage, the five men never utter a word. They are never spoken to or about. The Cook and his companions function as one. The Cook alone represents Cancer throughout the Tales.

To amuse his fellow Canterbury Pilgrims, the Cook tells a "litel jape," a little joke. Remember the star cluster Praesepe that means Manger also means Beehive. That's what the joke is about. The humor relies on the fun of a beast fable, in which correspondences are found between the behavior of animals and behavior or men. Clues abound. The Cook speaks not of an apprentice cook but of a victualler, a gatherer of foodstuffs. The apprentice is brown as a berry, a proper short fellow who is like a hive full of honey and merry as a bird in the woods. That's a great description of a medieval English brown bee. But he's not just any bee--he's a good-for-nothing drone. He's called "Perkyn Revelour" (Perkin Reveler) because he enjoys reveling with his kin; the story bears this out. (Picture a swarm.)
How appropriate for a cook to joke about a bee! Honey was a coveted cooking ingredient in Chaucer's day. Everyone knew about industrious worker bees, worthless drones, the normal--but sometimes temperamental--movements of swarms. Lazy drones and robber-bees consume disproportionate amounts of honey and spend their days in carefree living and thievery. Chaucer doesn't hesitate to describe actual bee activity when he says Perkyn and his accomplice suck whatever they could steal or borrow!
The story ends abruptly with the introduction of the accomplice's wife who had a shop and "swyved" for her sustenance. Her "swyving" identifies her as a prostitute. An alternate 14th-century term would be quene. That's a strong clue for a "queen" bee and is enough to give away the point of the joke.
All that's lacking is the reaction, the laughter, of another pilgrim who has caught on to the joke.
Posted by Dolores Cullen at 12:41 AM No comments:

I'm here to explain my recent absence. About a month ago a ladies group at church received a donation of fabric. That really doesn't say it adequately. The "donation" needed 2 SUVs to transport it! I got involved in sorting it all out, box after box of it. Very little of it was more than 1 yard long. Many "projects" had been started and left unfinished.  hmmmm  It took a bit of ingenuity to figure the most efficient way to use it all.
So, fast forward a week or so, after the rest was distributed to willing workers, I inherited the  swatches of fabric that were less than 1/2 hard. What do you do with many, MANY pieces of fabric less than 1/2 a hard long? Well, I make quilts. That's where I've been spending my time--in my workshop making quilts. They'll be donated to a charity to be given to those in need. I'm in my element and enjoying myself.
But I promise I'll soon continue examining the "details" that show the journeyers to be--as Donald Howard says-- "individuals, but never Pilgrims".
Posted by Dolores Cullen at 11:46 PM No comments:

Dolores Cullen
From Chicago. Hiked the Grand Canyon on my way to California.