To return to recollections of October 2000, here is the story of that library gig--one of my favorite Chaucer memories.
As a novice in the publishing world, I didn't think beyond getting my books into print. Thank goodness for my friend and mentor Virginia Adair. About two months before the Chaucer Mass that was planned, Virgina asked if I'd contacted the city library. My naïve response was "What for?"
"To get your work and your books recognized in Claremont," she said.
That had never occurred to me!
Virginia continued, "Just drop in at the library and ask to talk to Mr Kaufmann. Tell him what you've been doing and tell him you'd like to do a presentation. Mention my name, if you like."
That's what I did next day. The sign on an office door read "Charles Kaufmann." I asked at the circulation desk if I might speak to him. An affable gentleman came out to the counter and asked if he could be of service.
Putting my best foot forward I started off with: "Virginia Adair suggested I speak to you about doing a presentation on Chaucer." That got a positive reaction. Mr Kaufmann turned the pages of the library's event calendar to check available dates. October 17 was open. That would be perfect. I reported my success to Virginia, and then continued to concentrate on the Mass and reception arrangements, giving little thought to what I would actually say in my library presentation until mid-October.
Mr Kaufmann, in contrast--I found out later--went all out to inform the library patrons and the local high schools of the library's Chaucer event. Not only was this attractive flyer displayed in many places around town, but a copy was given to every book borrower for several weeks before the event. 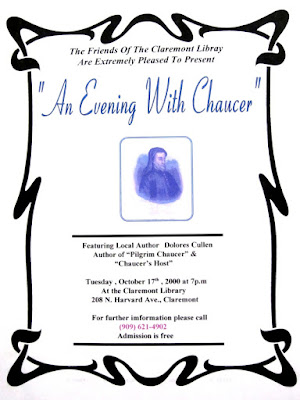 On that auspicious evening, I got to the library early to look things over. Forty chairs were set up in the meeting room, as well as a lectern for me and a table to display my books. Cookies and punch were set out on a table at the back of the room by a volunteer group called Friends of the Claremont Library.
The flyer mentioned two of my books. The third book, about the zodiac, would officially be published on October 25 (the Chaucer anniversary date), but I had received a box of pre-publication copies. So all three books--everything I had to say about the Canterbury Pilgrims--were available for the first time. Mr Kaufmann came it to ask if everything was to my liking. I assured him I was pleased and added, "Mrs Adair expects to be here."
He immediately commented that although she often planned to come to library events, she never had.  "It's mainly because of health issues. She's not well, you know," he added.
Just after 6:30 people began to drift into the room. First they came a few at a time, but soon it became a steady stream. Mr Kaufmann, who continued to hover nearby, ordered more chairs be brought in--and then more chairs! A group of high school students were especially noticeable when they all entered together. They looked stoic, almost glum. I figured their attendance would gain them extra credit. One boy took a seat in the first row right in front of the lectern, his face solemn and resigned. (That would change.) And the highlight of the evening, Virginia arrived escorted by her friends Judy and Connie. They took seats in the front row. Imagine Mr  Kaufmann's surprise and elation.
When the clock finally showed 7, I greeted this capacity crowd. I remarked that some faces were those of friends or relatives, but many were new to me and that was a very pleasant surprise. Mr Kaufmann had done a great publicity job!
I began my presentation with some background about my fascination with Chaucer and then I  passed around a handout of the game about the zodiac. I hadn't brought enough copies for that many people, but they were happy to share. When I got to the point where I ask if anyone sees an image, the stoic high school boy fairly leapt off his chair.
"It's a bull," he blurted out and almost immediately followed with "It's Taurus!" No more solemn face. He was beaming. His response got  a laugh and a lively period of questions and comments followed. Folks were genuinely interested in this new way of thinking about Chaucer's work. I closed with an invitation to everyone to attend the Chaucer Mass the following week.
Mr Kaufmann added the finishing touch by thanking me and telling everyone my books were available to purchase. He assigned a young man who volunteered at the library to handle the money while I signed books. That was another new thrill. Many people bought the books.
As the clock drew near to 8 pm, closing time for the library, there were still several people talking to me and looking at the books. Mr Kaufmann announced to the library staff to feel free to go home on time. He, personally, would close the library.

The next day I returned to contribute 10 percent of my sales to the library. Mr Kaufmann said it wasn't necessary, but after such an evening, I had to show my gratitude.

Dolores Cullen
From Chicago. Hiked the Grand Canyon on my way to California.